If there were not enough compelling reasons to participate in the National Early Years Summit (11 and 12 March 2020) and start a concerted decade long program of national action focusing on the early years, last month’s Productivity Commission Report on Government Services (RoGS) surely strengthened the case.

RoGS was a stark reminder that our nation still faces an enormous task in turning around child abuse and neglect. There is solid and unequivocal evidence that these two issues are key drivers of poor child development outcomes with devastating and long-term adverse consequences that can extend into adulthood. To illustrate, below are just a few salient facts drawn from the Report. 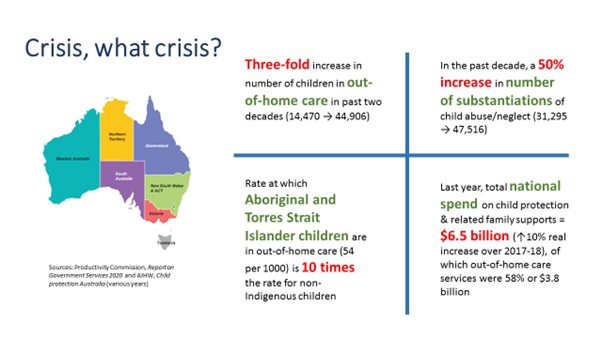 These facts underline the urgency and magnitude of the task before us. The National Summit will bring a wide range of sectors together to take stock of what’s working for children as well as the gaps in knowledge and practice, and to start devising an early years plan for the nation. This will be a highly participative, leadership gathering – it’s a time to raise our eyes up and think about the nation we want for our children and get on with the task of building it.

The Summit will also play a key role in building on work being undertaken by Families Australia through its national consultations on the future of national child and family wellbeing policy to succeed the National Framework for Protecting Australia’s Children 2009-2020.

Please consider being part of a gathering of the nation’s top leaders who will be discussing and shaping a major national campaign on the pressing needs of children, especially in the first thousand days. I participated in a recent webinar, Putting the evidence we all know (and some we don’t yet) to work for babies and toddlers which can be viewed here.

There is more information about the National Early Years Summit here.