Now, a record $4.8 billion price tag of not getting it right for every child

As shown in the chart below, national expenditure on child protection grew by more than 20% in the past five years (since consolidated national record-keeping commenced in 2011-12). 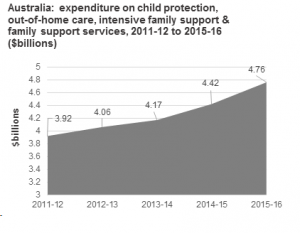 Also noteworthy is the increase of 7.7% in total expenditures on child protection and related support services in 2015-16 compared with the previous year when spending was $4.4 billion.

National expenditures on out-of-home care show a similar trend. The chart below, also drawn from Productivity Commission (2017) data, shows how these expenditures more than doubled between 2006-07 and 2015-16 (from $1.34 billion to $2.72 billion). 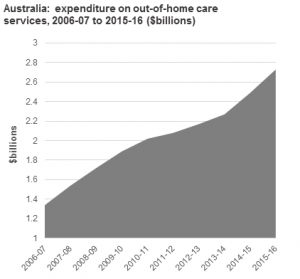 These figures do not, of course, speak to the enormous human toll that is taken by child abuse every day of the year across Australia.

Yet, they do underline the urgent national challenge we face collectively in achieving substantial and sustained reductions in child abuse at the earliest possible time.

Later this year the Royal Commission into Institutional Responses to Child Sexual Abuse will present its final report. That will be one of the most important opportunities in a generation for the nation’s leaders to dedicate the necessary resources and determination to end child maltreatment. It is important that we seize that moment.